‘Get Lucky’ the first single and perfect earworm from ‘Random Access Memories’ grabbed me instantly and wouldn’t let go, I championed it to everyone I knew advising them to ‘get on board as it will get you in the end anyway’. I couldn’t wait for the album and then I heard it. The first time I listened to the record was when it streamed on ITunes I had high expectations and was thoroughly underwhelmed and disappointed. The second time I was walking home at night in the rain and still reeling from the fact it didn’t contain 13 songs anything like ‘Get Lucky’ I was yet again left thinking what the hell is this MOR Avant jazz rubbish. A few friends had already got the album and kept telling me to give it one more go but I was hesitant on wasting yet more time on something that I couldn’t see ever getting. And so the third listen was in the garden and in the sunshine, glass of wine in hand as background music until I realised I was actually being drawn to it, it was forcing its way into the foreground, I was hearing things I’d clearly missed before like strange time signatures and chord changes hidden in the songs in plain sight. How the hell had I missed all this the first few times? It suddenly dropped and I couldn’t believe how good it actually was, I had to keep listening over and over again. I’m still listening. ‘Give Life Back To Music’ with its robot voice and disco beat, ‘Giorgio by Moroder’ with its spoken word story before kicking in with its ferocious live drumming and strange sounds, the eighties feel of ‘Instant Crush’ with the Strokes Julian Casablancas on vocals, the Television sitcom theme style of ‘Fragments of Time’, the closer ‘Contact’ which builds to a glorious crescendo there is so much here to love. Daft Punk have somehow taken influence from every decade in pop and made it into something new, as Alexis Petridis said you think the songs sound like something else until you go to your record collection to try and find it and cant. Now all of the songs are in my head fighting to be the one I catch myself humming or singing and at any point I’m never sure which one will win out. I’m so glad I stuck this this record and eventually succumbed to its power because if I hadn’t I wouldn’t now be in love with its oddly perfect pop genius. Try it and if you don’t like it try it again, try a few times in the sunshine and eventually I’m sure when you have the moment where it clicks you will, like me, be pleasantly surprised. 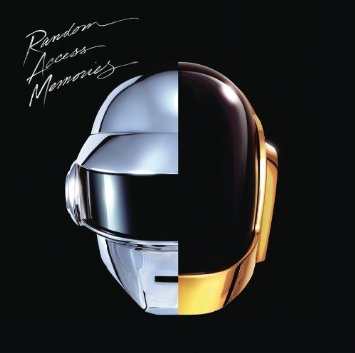